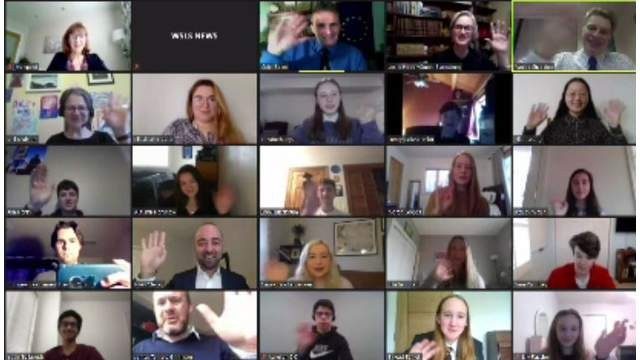 Yannis Stivachtis and Colin Baker kick off "Bridge the Pond," a collaboration among students and faculty in Blacksburg, VA and Dublin, Ireland

Yannis Stivachtis, professor in the Department of Political Science, will serve as the chair for a three-year term. Stivachtis is also director of the International Studies Program and associate chair of the department.

Jean Monnet Chairs are awarded by the Erasmus+ Program of the European Union's Education, Audiovisual, and Culture Executive Agency (EACEA). The recipients are recognized for their efforts to "deepen teaching in EU studies embodied in the official curriculum of a higher education institution" and are responsible for further "in-depth teaching on EU matters."

In 2020 the EACEA recognized Yannis A. Stivachtis, professor of political science, with a Jean Monnet Chair. Stivachtis' research and teaching interests include the European Union’s strategy, external relations, and interior policies; European organizations; the evolution of international society; international and world order; the study of regional international system/society in Europe, Eurasia, and the Middle East; and international security.

Stivachtis also serves as associate department chair, director of the International Studies Program, and university coordinator for the Diplomacy Lab program. He currently is the editor of the Critical European Studies book series (Routledge) and co-editor of the Athens Journal for Mediterranean Studies; director of the Center for European and Mediterranean Affairs; vice-chair of the Marie Sklodowska-Curie Individual Fellowships Program of the European Commission-Research Executive Agency; Advisory Board member of the Center for Intelligence and Security Studies, Bellevue University; and senior advisor of the Research Institute for European and American Studies.

This course examines the rise of identity politics, broadly defined, on the European continent in the early to mid-twentieth century. The course also explores historical legacies of totalitarianism and the emergence of new political pressures that are today contributing to the resurgence of nationalism, racism and fascism in Europe, especially relative to the migration of refugees from the Middle East following the Long Arab Spring.  However, in-class discussion will also include references to other world regions and the United States.

The purpose of this course is to familiarize students with global and regional security governance and investigate how regional and global international organizations conceptualize security and how they attempt to prevent or manage international conflict. Topics under examination include the United Nations system, the European Union, NATO, the Organization for Security and cooperation in Europe (OSCE), the Shanghai Cooperation Organization (SCO), the Organization of American States (OAS), the African Union (AU), ECOWAS, and ASEAN.

This course examines the nature of order in world politics and investigates how order is maintained in the contemporary international system. The course emphasizes the study of world order at the regional level and focuses on Europe. To this end, various theoretical approaches to European integration are analyzed.

This experiential learning course focuses on multilateral diplomacy in the framework of regional international organizations and particularly on NATO and the European Union. The course examines the format and products of such multilateral conferences, decision-making process, and negotiations and utilizes mock exercises to illustrate the strategies and tactics employed by member states.

The purpose of this course is twofold: first, it seeks to investigate the relations among the United States, the European Union, Russia and China and assess their impact on world order; and second, to analyze EU-Russia relations and their impact on European Security. To this end, the course will be divided into four parts. The first part will examine Russia’s approach to world order and particularly Moscow’s relations with the United States, the European Union and China. The second part will assess the impact on great powers relations on foreign and security affairs while the third part will focus on global economy (trade and finance). The third part will investigate the impact of great powers relations on climate change and energy.

This course introduces the students to the fundamentals of grand strategy and examines their relevance and applicability to the strategies of the United States and the European Union. Topics under examination include levels, types, and sectors of security; the relationship between security and strategy; levels and types of strategy; strategy formulation, implementation and assessment; the relationship between strategy and policy; analysis and comparison of EU and US security strategies.

IS 1104 Introduction to European Studies

The purpose of the course is twofold: first, to examine the relations between the EU, one the one hand, and the United States, Russia, and China on the other; and second, to investigate the implications of the relations among these actors for the present and future world order.

This experiential learning course focuses on multilateral diplomacy in the framework of regional international organizations and particularly on NATO and the European Union. The course examines the format and products of such multilateral conferences, decision-making process, and negotiations and utilizes mock exercises to illustrate the strategies and tactics employed by member states.

IS 1104 Introduction to European Studies

An introduction to the history, geography, politics, economy, culture, religions, and society in Europe. Survey of European sub-regions and states.

Analysis of the process of industrial, political, legal, economic, social and cultural integration of states in Europe as a whole or within a European sub-region. History and theories of European integration. Examination of various European organizations (i.e., EU, NATO, OSCE, OECD, CoE, CIS, EAEU, CSTO, SCO) whose actions reflect different approaches to and different degrees of integration in Europe.

The purpose of this course is to familiarize the students with various aspects of multilateral diplomacy and the decision-making mechanisms of the EU and NATO.