Sean Pedulla swiped the ball away from the driving North Carolina player to start the fastbreak alongside teammate Darius Maddox. Maddox converted the layup in transition off the assist from Pedulla.

Meanwhile, Jake Lyman painted the picture as the play-by-play voice for the 3304 Sports broadcast while Sam Alves took notes on the play courtside for his post-game recap article.

The common thread between the four of them? Pedulla, Maddox, Lyman, and Alves are all sports media and analytics majors in Virginia Tech’s School of Communication.

Their presence on and off the court turned out to be a Virginia Tech sports media and analytics program takeover happening under the roof of the Barclays Center in Brooklyn, New York, from March 8 to 12 for the 2022 ACC Men’s Basketball Tournament. With two student-athletes competing for the Hokies as well as a dozen other students and recent alumni covering the action in the Big Apple, it all points toward the meteoric rise of the sports media and analytics program, which was officially launched as a major in 2020.

“Being a sports media and analytics major has changed many things for me in terms of communicating with others and building personal skills,” Maddox said. “Being at such a competitive tournament and in a great environment — with classmates calling our games and even asking me questions during press conferences after games — was extremely comfortable. I really appreciate the ACC for giving them this opportunity.”

With Maddox and Pedulla providing a spark off the bench over the Hokies’ four wins in four days along with the extensive coverage that all the students provided for their respective media outlets, Virginia Tech made a name for itself — both on the court as a basketball program and off the court with its sports media and analytics program.

“By Friday afternoon, our sports media and analytics students were carrying themselves with such confidence and poise, all while creating great content,” said Bill Roth, a professor of practice at Virginia Tech and the catalyst behind the sports media and analytics program. “They felt like they owned the city. As historic as it was for the basketball team to win its first ACC Championship, it was unprecedented for us to have 12 students in New York covering the action on their spring break. We turned Barclays Center into a Virginia Tech classroom.”

“Working in sports media and analytics has been a great experience so far,” Pedulla said. “I’ve had so much fun learning about everything that goes into different modes of sports. The people I’ve met in the classes and the professors I’ve had make me enjoy it even more.”

Maddox’s star illuminated the brightest during the week in Brooklyn. His March Madness moment came when he nailed the game-winning three-pointer to beat Clemson in the second round of the tournament. That win kickstarted Virginia Tech’s magical run to the ACC Championship.

As the Hokies marched on, their run afforded more opportunities for the student journalists to cover their classmates and chat with them pregame.

“It was cool to know that Darius and Sean want to do what we’re doing too,” said Lyman, a senior in the program. “Even though we’re the ones calling their plays, they’re like us too. Eventually they hope to be broadcasting as well.”

All the while, there were experiential learning moments galore for the sports media and analytics students. They were not just students, but credentialed professionals by the ACC.

Chris Hirons (SMA ’23) learned what life on the go can be like as a journalist. He covered the ACC Women’s Basketball Tournament earlier in Greensboro, then traveled north to Brooklyn with the rest of the crew, before returning home to Blacksburg and writing eight articles in 10 days.

The experience led Alves to recall a project in the media writing class of Dale Jenkins, a School of Communication advanced instructor who had assigned his students to interview a professional in a career they wanted to pursue. In Alves’ interview with a Pittsburgh Steelers reporter, he learned that in the profession, you don’t have time to cheer.

“When Darius Maddox hit the game-winner, I just had to tweet and post and do all that stuff,” said Alves (SMA ’23), a men’s basketball beat reporter for 3304 Sports, the multimedia platform for student sports journalism at Virginia Tech. “I was in the zone. A few minutes later, once the broadcast had ended and I was going to the press room, it just hit me: Holy cow, Darius Maddox just hit a game-winner to save Tech’s season!”

Wyatt Krueger (SMA ’22) said he learned more about the profession in a matter of a few days than he had in the previous years combined by diving head first into the action. He was on the receiving end of legendary Syracuse coach Jim Boeheim’s ire for asking a probing question, a common occurrence for sports journalists at press conferences.

Krueger also pursued an intriguing enterprise story right down the road in a tumultuous part of the city at a homeless shelter that was once the hospital birthplace of Michael Jordan and Mike Tyson. While access inside the shelter was denied, Krueger still talked to a few residents outside the facility to hear their stories.

“Bill Roth always stresses getting out of your comfort zone and trying new things,” Krueger said. “I just wanted to take advantage of as many opportunities as I could while I was in Brooklyn. We don’t get that many chances like that in life.”

While all students were there to provide coverage for all games throughout the tournament, regardless of who was playing in the championship, Virginia Tech’s surprise appearance in the final made it so much sweeter. In the end, the Hokies were crowned champions with a 82–67 victory over Duke.

“I was lucky enough to be the one on the call for the championship, which was a surreal moment,” Lyman said. “I could see the clock ticking down, and the confetti started spraying. Never in a million years would I have imagined I’d be the one who got to call it. There were probably four people in that stadium who were calling play-by-play when the Hokies won their first ACC Championship, and I was one of them.”

Along the way, the students had an impromptu meeting at a deli with ACC Commissioner Jim Phillips, who offered them insights into working in sports media.

“Commissioner Phillips was outstanding with our students,” Roth said. “He was relatable and inspiring. Jim and the league office have always believed in the mission and vision for our sports media and analytics program.”

The experience was all made possible through the generous support and backing of the School of Communication. The work and professionalism from the students garnered the attention of many, notably Tim Sands, president of the university; Laura Belmonte, dean of the College of Liberal Arts and Human Sciences; and friends, family, and alumni of the school.

“It was a no-brainer to send our students to Brooklyn to take in these experiences that will prepare them for their careers all while providing a trip they’ll never forget,” said Robert E. Denton Jr., director of the School of Communication. “The buy-in from these students to forgo a relaxing spring break, work in a professional environment night after night, and improve their craft in the process was wonderful to witness.”

Sleep had been scarce over the course of the week in Brooklyn. Now, all the students have arrived back in Blacksburg, attempted to catch up on some rest, and reflected upon the wild week that will live on forever.

“My mom texted me, ‘Could this trip have gone any better?’” Alves said. “It literally could not have. Everything just came together in an unbelievable way. 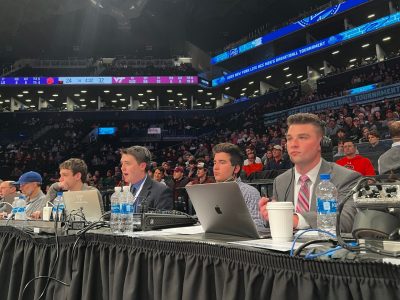 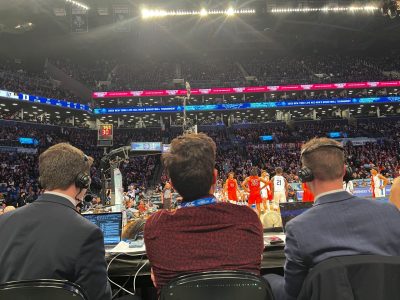 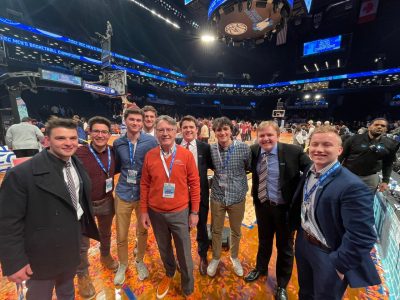 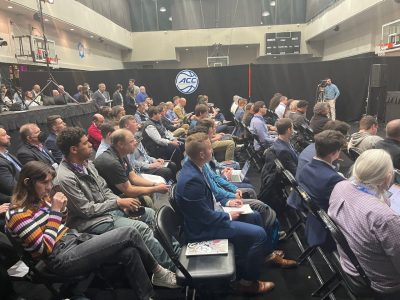 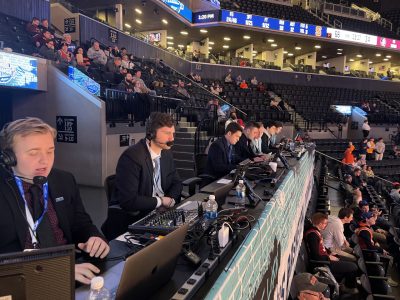 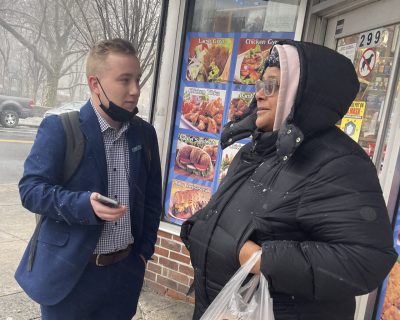 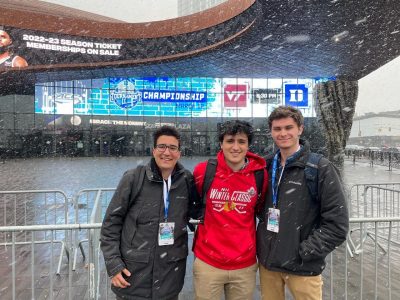 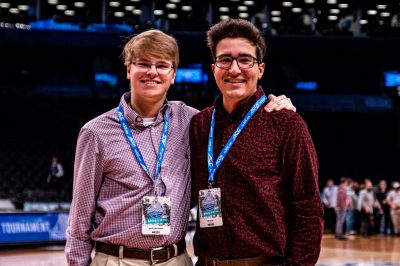 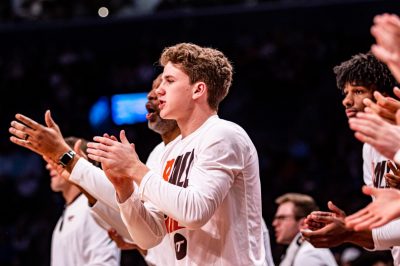 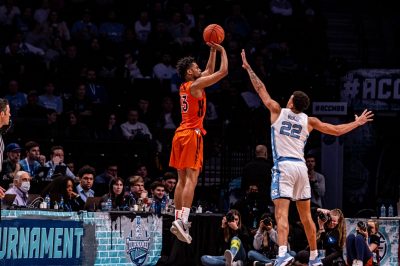