If you’ve ever seen the award-winning nature documentary called “Planet Earth,” you have experienced science communication at its finest. With strong science communication, scientists are able to capture the imagination, re-establish trust with the public, and spark meaningful discussions that give science a stronger presence in our society.

On Feb. 27 and 28, graduate students and communicators came together to strengthen their science communication abilities at the second annual ComSciCon–Virginia Tech.

ComSciCon is a workshop series that gives young researchers the necessary skills to communicate their scientific research to broad and diverse audiences.

The workshop series began as a partnership between Harvard University and the Massachusetts Institute of Technology in 2012, and it has become something much larger, with dozens of franchised chapters popping up across the United States and Canada. Virginia Tech became a ComSciCon chapter in 2019.

This year’s event at Virginia Tech centered on the theme of inclusion, diversity, and accessibility in science, technology, engineering, arts, and math — otherwise known as STEAM. In addition to a new theme, this was the first time that ComSciCon–Virginia Tech included attendees and panelists from other universities, including Radford University, the University of Virginia, and Duke University.

On Thursday evening, statistician and journalist Regina Nuzzo addressed the gap between modern research advances and our “Stone Age” brains. For her keynote address, Nuzzo took the audience on a personal journey, as she drew parallels between science communication and her own struggles with communication.

“I was born half deaf,” stated Nuzzo. “But I was losing hearing with every passing year. And it was just getting more difficult to connect to people out in the hearing world — out in the larger world. There was so much there. So, after a lot of research and a lot of fretting and a lot of waiting, I got a cochlear implant.”

A cochlear implant is a small electronic device that translates auditory information into electric signals, which directly stimulates the nerve that is responsible for hearing.

After Nuzzo received her cochlear implant, she didn’t experience significant improvements in her hearing. She later realized that her progress wasn’t due to a shortage of intelligence, but rather the fact that her brain was so new to receiving this onslaught of information. In a way, her experience is very similar to what someone goes through when they are trying to make sense of a complicated research subject that is entirely new to them.

“Brains are weird. Whether it’s taking in information through this different format or modality or whether we are trying to communicate, we can’t just throw it at people and say that you just need to be smart enough,” said Nuzzo. “Honest, clear communication is precious. We shouldn’t take it for granted. It’s not about ‘dumbing down.’ It’s about learning about your audience and the brains at the other end.”

Sally C. Morton, dean of the College of Science and interim director of the Fralin Life Sciences Institute, attended Nuzzo’s keynote address. She believes that we are in dire need of effective science communication.

“Communicating science to a broad swath of audiences is ever more essential in today’s complex world, and ComSciCon and the Center for Communicating Science provide effective learning opportunities for Virginia Tech scientists at all levels. As Dr. Nuzzo emphasized, we need to engage the public in science via stories and even an occasional element of surprise so that our science is heard and can truly have an impact,” said Morton, who is also a member of the steering committee for the Center for Communicating Science.

“These graduate students planned the event from start to finish and did an enormous amount of work,” said Carrie Kroehler, the associate director for the Center for Communicating Science and an instructor of a graduate-level course called Communicating Science. “We are so pleased that enthusiasm for communicating science has led to the formation of this new student club.”

Through a variety of workshops, attendees interacted with fellow graduate students, expert writers, communicators, and panelists in the field of science communication. Attendees learned how to find the story in their research, how to condense their research into a nutshell, and how to promote accessibility and inclusivity through communication. On top of all of that, they had the opportunity to produce original writing for publication.

The learning process was reciprocal. As the attendees gained new tips and tricks, experienced panelists had a chance to reflect on lessons learned. 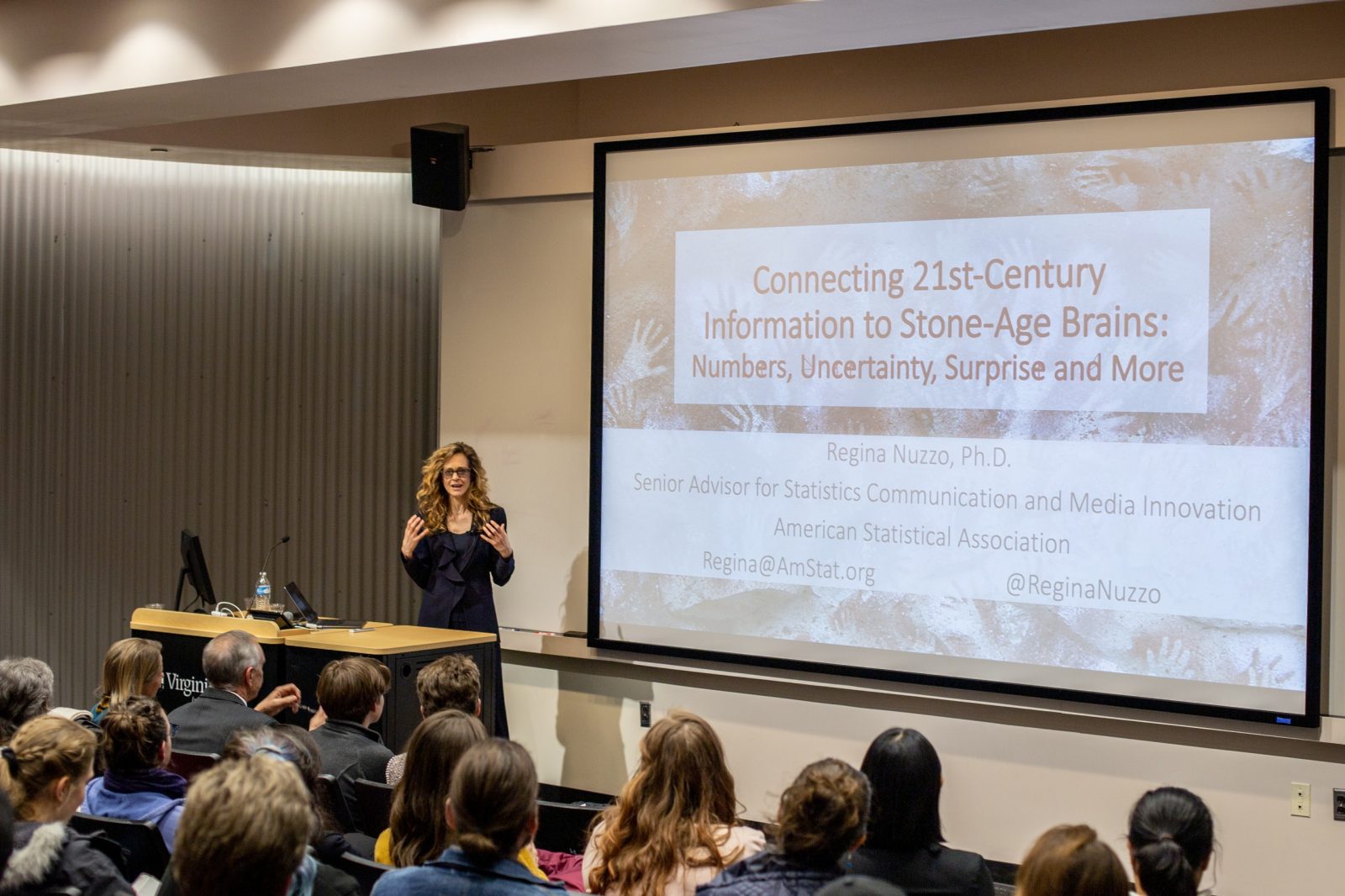 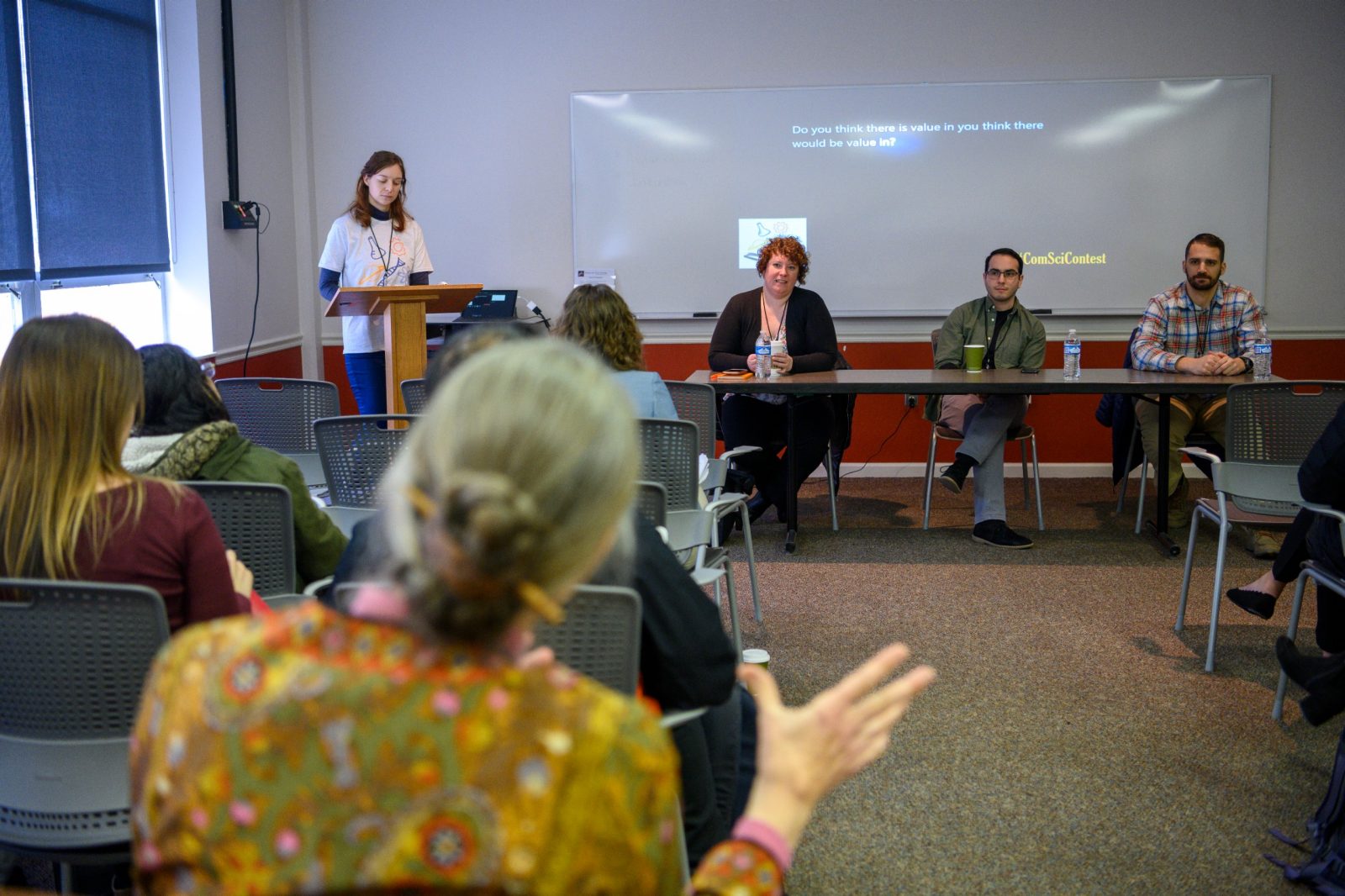 Kelly Scarff (left), a Ph.D. candidate in rhetoric and writing; Ubadah Sabbagh (center), a Ph.D. candidate in translational biology, medicine, and health; and Nicholas Caruso, a postdoctoral associate in the Department of Fish and Wildlife Conservation led a panel that focused on helping students learn how to disseminate their research through social media, publications, and more. Photo courtesy of Dan Mirolli. 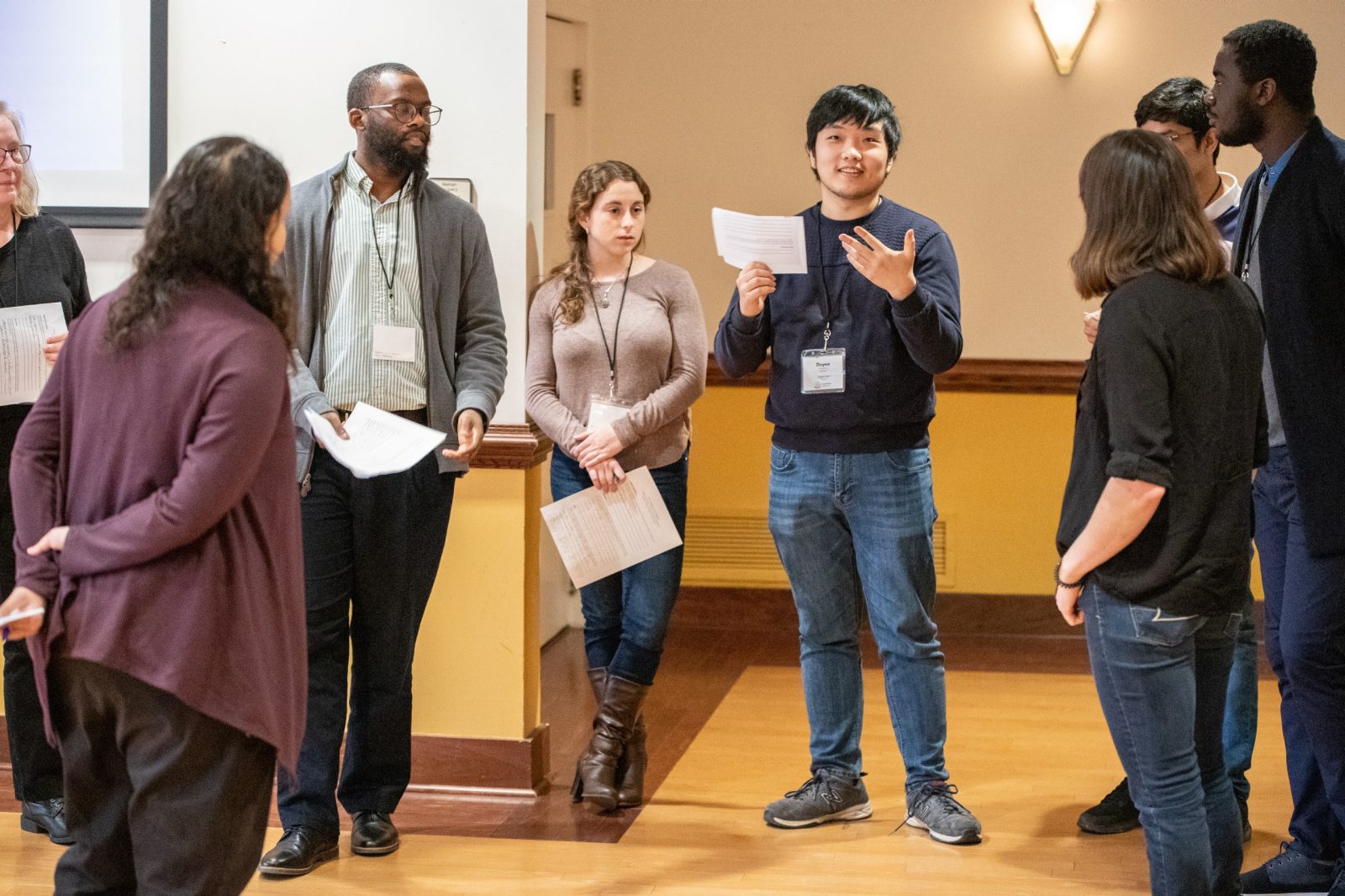 Stephanie Edwards Compton (left) and Susan Chen (right) were the co-chairs of the ComSciCon organizing committee. Carrie Kroehler (center), associate director for the Center for Communicating Science, attended and participated in many workshops. Photo courtesy of Alex Freeze. 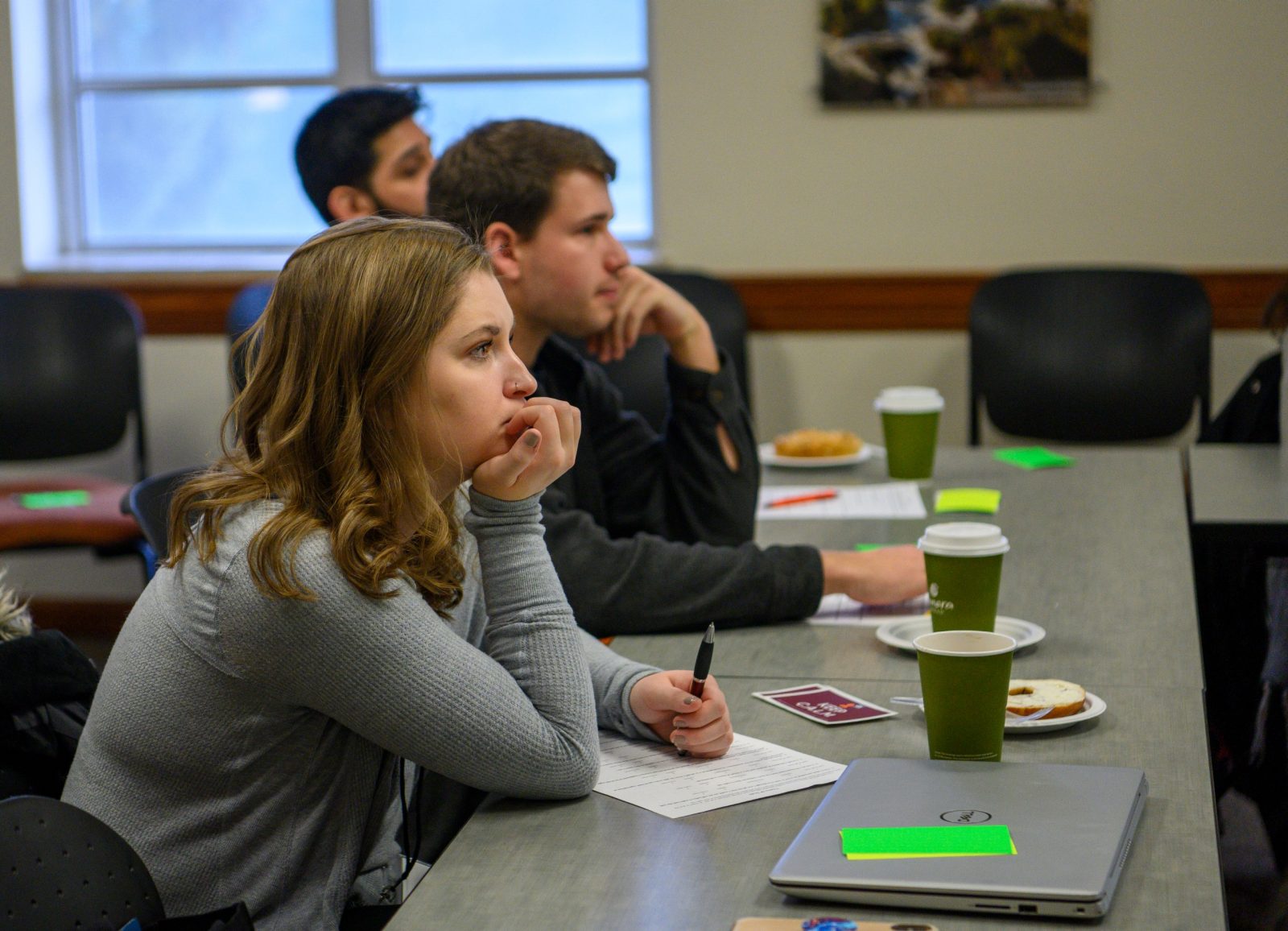 Attendees listened closely as the morning sessions kicked off. This session was focused on inclusive STEAM communication. Photo courtesy of Dan Mirolli.

In the "Your Research in a Nutshell" workshop, attendees were asked to explain their research to a partner in 10-, 30-, and 60-second speed talks. Photo courtesy of Dan Mirolli. 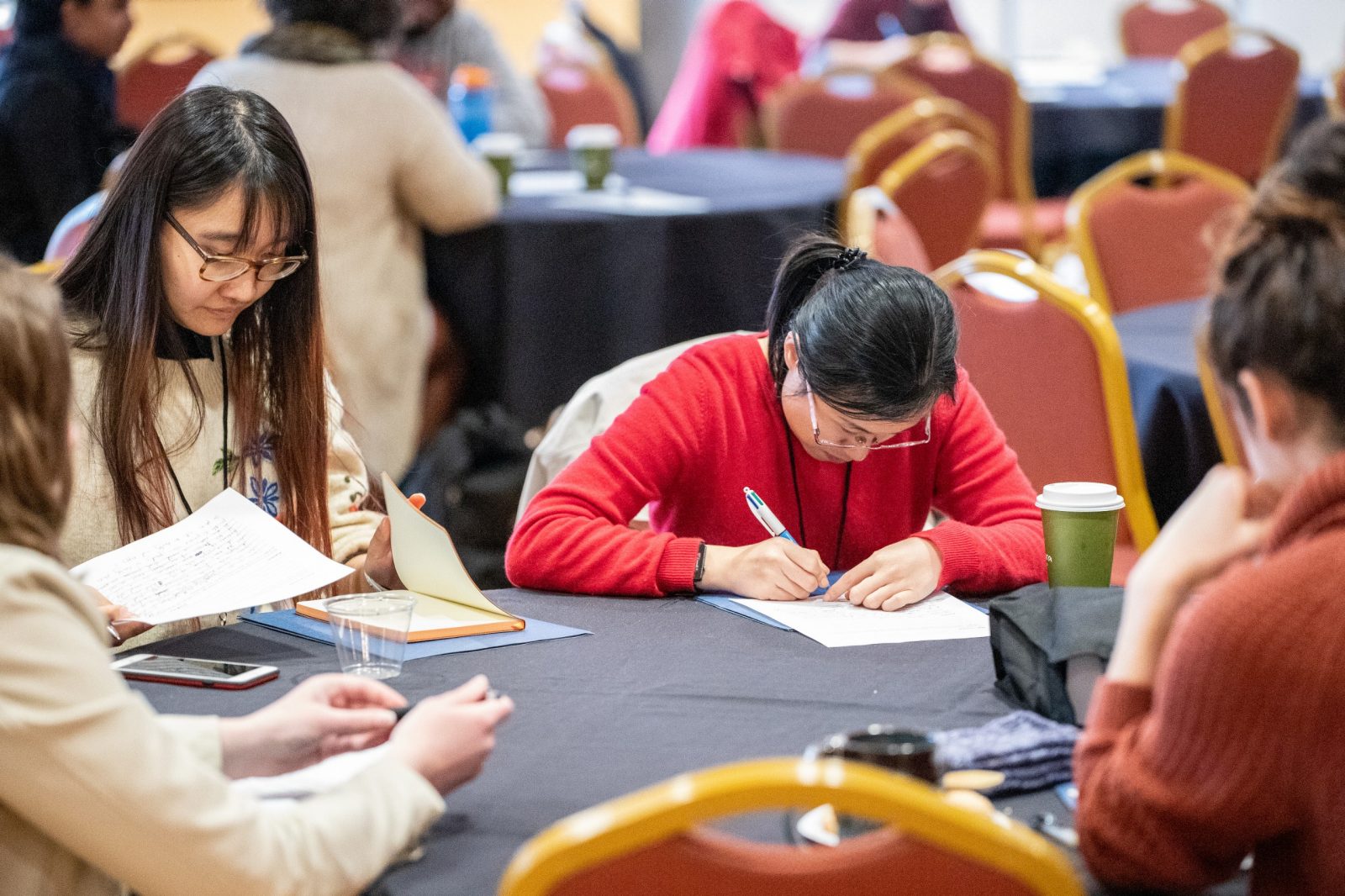 Attendees were given opportunities to write about their research in new ways. Photo courtesy of Alex Freeze.

“It’s a lot of different things, right? There’s no one science communication. But one thing that it isn’t is spewing information into someone’s head. There’s a conversation. There’s emotion. There’re biases. There’s personality. Keeping that in mind is important,” said Nick Caruso, a postdoctoral associate in the Department of Fish and Wildlife Conservation and co-author of the bestseller “Does It Fart?”.

As the final day came to a close, discussion about future ComSciCon events was already taking place, as attendees from the University of Virginia met with Virginia Tech organizers to ask questions and generate new ideas.

“I think that it’s great that we have scientists that are this passionate [about science communication]. If you can help get other people passionate about it as well, I think that we would be better off as a community,” said Ubadah Sabbagh, a graduate student in Virginia Tech’s translational biology, medicine, and health program.

ComSciCon–Virginia Tech was organized in collaboration with the Communicating Science Club and the Center for Communicating Science, which is housed in the Institute for Society, Culture, and Environment. The center is led by director Patricia Raun, a professor of theatre arts in the School of Performing Arts in the College of Liberal Arts and Human Sciences, and associate director Carrie Kroehler.

“The creative approaches taken by the Center for Communicating Science to educate our faculty and students are grounded in the notion of collaborating across differences,” said Karen Roberto, director of the Institute for Society, Culture, and Environment and a University Distinguished Professor in the Department of Human Development and Family Science. “Patty Raun and her team provide opportunities that help members of the Virginia Tech community to better conceptualize and articulate the work that we are passionate about and reduce communication barriers that often curb enthusiasm for and derail interdisciplinary efforts.”

“As a center supported by ISCE, their work is critical to ensure that advances in knowledge are shared in meaningful ways that connect faculty, students, and the public as they address the complex issues impacting the lives of people and places in Virginia, nationally and across the globe,” said Roberto.

The event was supported by the Global Change Center, the College of Science, the Fralin Life Science Institute, 4-VA, and the Graduate School. Other supporters included CytoRecovery; the Department of Psychology; the Department of Human Nutrition, Foods, and Exercise; and Jack Wardale Videography.

ComSciCon-Va Tech 2020 was funded in part by a grant from 4-VA, a collaborative partnership for advancing the Commonwealth of Virginia. Notes from each session of the conference are available here.