Abraham Lincoln’s top hat is upstairs. Thomas Edison’s 1881 incandescent lamp around the corner. But on this day, the marvel catching attention in the Flag Hall of the Smithsonian National Museum of American History was an interactive light-and-sound installation from Virginia Tech.

Smithsonian visitors made a beeline for Celestial Garden. From the outside, the exhibit looked like a swaying grove of nylon teardrops suspended from metal girders. Once you waded among them, you discovered that sensors and accelerometers inside each 8-foot pendant respond to movement. Touch them, and they emit bursts of noise and splashes of sherbet-colored light.

The result was irresistible and Instagrammable. Little kids giggled. Young adults hugged the pods. One 80-year-old woman emerged with an exhilarated “wooh!”

“She was with her grandchildren, and she had this huge grin on her face,” said Thomas Tucker, an associate professor of creative technologies in the School of Visual Arts, who created Celestial Garden with multimedia designer David Franusich and immersive audio specialist Tanner Upthegrove from Virginia Tech’s Institute for Creativity, Arts, and Technology (ICAT).

Celestial Garden was one of 26 exhibits on display at the Smithsonian for the ACCelerate Festival, held April 8–10 at the National Museum of American History. For the third time, ICAT organized this celebration of creativity in partnership with the Smithsonian’s Lemelson Center for the Study of Invention and Innovation.

Cutting-edge, science-meets-art projects from Atlantic Coast Conference universities lined two floors of the museum’s west wing. An estimated 31,500 people swung by for a look over the weekend. “It’s orders of magnitude bigger” than the number who would normally see these kinds of projects, said Ben Knapp, founding director of ICAT.

Celestial Garden was almost too popular. The team posted “please be gentle” signs in response to field trippers’ enthusiasm for the puffy pods. “It’s been kind of crazy,” said Tucker, “but it's been amazing watching thousands of people come up and start really playing with it.”

Across the ACCelerate festival, researchers and students passionately explained subjects as big as the expanding universe or as small as the iridescence on a butterfly wing. Displays focused on everything from fast fashion to the march in Selma to surgery in outer space. Unlike many of the museum’s permanent exhibits, ACCelerate festival displays weren’t under glass. They welcomed participation and conversation.

In a world where 81 percent of Americans can’t name a single living scientist, according to a 2018 poll by Research!America, the ACCelerate Festival’s in-person gathering of creators, engineers, and scientists powerfully reframes who gets to invent cool stuff. “Our mission really is about inspiring invention and innovation in our visitors,” said Emma Grahn, museum program specialist with the Smithsonian’s Lemelson Center. “And I can't think of a better way to do that than this festival.”

The art of blockchain

Down the escalator from Celestial Garden, Skyler Liang, a senior at Virginia Tech in the accelerated bachelor's/master's degree program in computer science, tried to clarify a tough technical concept: blockchain. Liang pointed to the kinetic sculpture behind her, a grid of 30 plexiglass cases each containing a computer tablet being tapped by a robotic arm.

This is LACE, the brainchild of Virginia Tech collaborators Kirk W. Cameron, professor and associate department head in computer science, and Sam Blanchard, an associate professor of studio art. “It’s trying to demonstrate how blockchain works, but in a fairly straightforward and simplified way,” said Liang.

LACE is an artistic representation of the steps necessary to create cryptocurrency. Think of the 30 tablets as a representation of computers all over the world that mine for bitcoin by doing some work, in this case, winning a number guessing game. Once someone wins the round, the other “players” have to agree that the person played fairly. Yes? Then bitcoins get assigned and are listed in an electronic ledger: the blockchain.

Even with the math and cryptography details stripped out, blockchain is complicated. “It’s one of those things that we've all heard of, and it's really difficult to wrap your mind around,” said Blanchard.

With funding from ICAT and the Institute for Critical Technology and Applied Science (ICTAS), he and Cameron regularly partner on projects that distill complex systems in distributed computing “into something where we can bring more people to the party and make it more accessible for everyone to understand.”

The glow from the array of tablet screens at the entrance to the festival ensured that a crowd remained around LACE. That filled Kelsey Ayers with pride. She’s a Virginia Tech alumna who works for the Smithsonian and volunteered to help with the festival. “Every time I go on an escalator by the Virginia Tech blockchain project, I always say under my breath, ‘Go Hokies.’ All our projects are amazing, so it’s just like a moment of pride that fellow Hokies do really awesome things.”

At the river’s bottom

On the second floor, visitors to Virginia Tech’s Benthos 360 exhibit strapped on virtual reality headsets and descended into the underwater world of endangered freshwater mussels. (“Benthos” is a term for the flora and fauna found at the bottom of a body of water.)

Matthew Hull, an environmental nanoscientist with ICTAS, wanted to do a project exploring nanotechnology in the environment. He connected with Justin Perkinson, an assistant professor of cinema in the School of Performing Arts. Then they met with Jess Jones, a restoration biologist with the U.S. Fish and Wildlife Service and an associate professor in the Department of Fish and Wildlife Conservation at Virginia Tech. (Perkinson likes to call him “Mussel Man.”)

Together, their focus shifted to the conservation of freshwater mussels. As filter feeders, mussels are impacted by nanoparticles in the environment — and that environment is being threatened. They’re among the most endangered organisms in North America. “It was a whole new underwater world,” said Perkinson, who had never before filmed in water. “And I just thought, 'This is a problem, right? How can we visualize this?'” An ICAT grant made the Benthos 360 project possible.

At the ACCelerate Festival, virtual reality headsets allowed guests to enter the sun-dappled depths of Appalachia’s Clinch River. Soon, they were watching Jones scatter handfuls of peanut-sized mussels, bred in the Virginia Tech Mussel Lab. Jones narrated, explaining why mussels are in decline and why he’s working to save them. One gentleman, pulling off his VR headset, recognized Jones as the hero of the film and asked for his autograph.

The seven-minute experience is so striking that visitors awarded Benthos 360 one of two People’s Choice awards at the festival. Jones knows it packs an emotional punch that all the scholarly PowerPoints in the world can’t create. “We try to connect with the head and the heart,” said Jones. Once people experience the environment of mussels, they understand the importance of caring for them at an intuitive level.

Jones’s parents and aunt visited the Smithsonian for the ACCelerate Festival. By the time they removed their VR headsets at the Benthos 360 exhibit, they got it. “My aunt was here, and she was crying,” said Jones.

“Your mom was crying,” said Perkinson, “and she made me cry.”

Most of the projects at the ACCelerate Festival included students. They staffed booths, explained science, demonstrated projects, fixed tech problems, and invited questions. The Studio 72 living-learning community at Virginia Tech brought a van full of undergraduate students to help. For Evie Wohnig, a junior studying creative technologies and creative writing, seeing the festival’s blend of art and science was inspiring. “This helps make art feel kind of tangible,” she said. “You’re able to add creativity to even the most science-y things.”

One of the goals of the ACCelerate Festival is to encourage more cross-university collaboration and hands-on learning experiences among students. This year, ICAT and the Lemelson Center have hosted meet-and-greets so students can find common interests. Later this fall, they’ll award a new ACC Accelerate Fellowship of $5,000 to enable a team of students from different ACC schools to work on an ACCelerate-style project.

The fusion that happens when artists and scientists, students and faculty mix is the future of higher education. “Virginia Tech is a leader in the drive toward that future,” said Knapp, “and the ACCelerate festival is the largest event in which the public can experience that leadership.”

Being in the Smithsonian, among the great artifacts of an innovative nation, added inspiration to the journey. 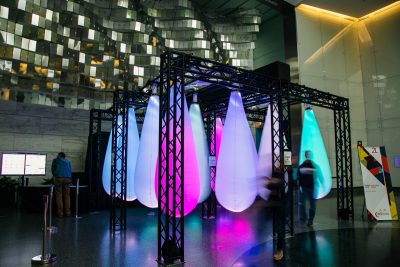 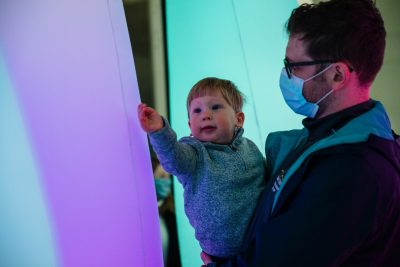 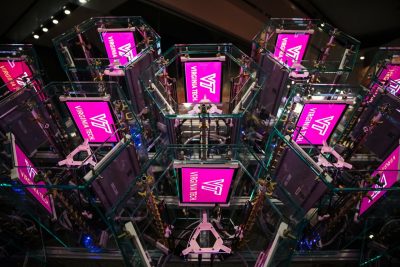 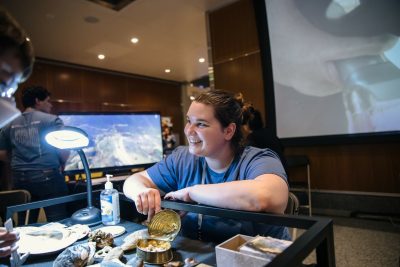 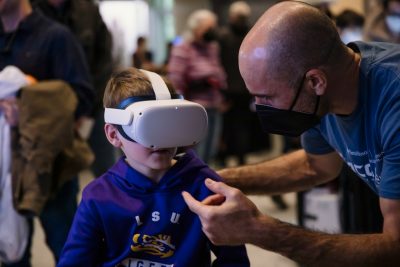 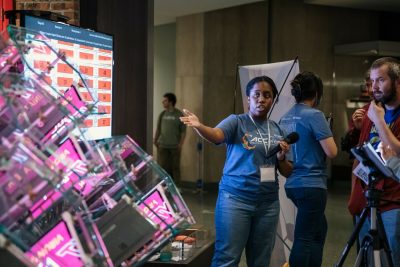 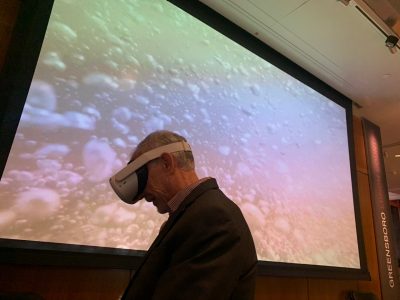 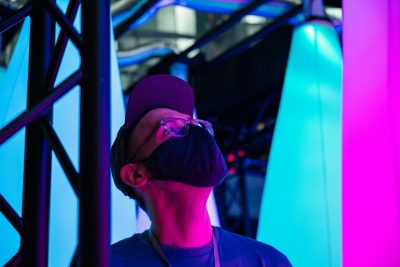